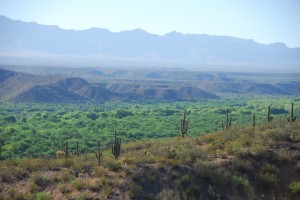 This past Memorial Day weekend was a busy one for the Important Bird Area (IBA) crew. In three days we surveyed in three different IBAs in three different habitats with three different target species.
The weekend started with a survey of the beautiful saguaro uplands habitat adjacent to the Lower San Pedro River IBA on the BHP property near San Manuel, AZ on Friday morning. This survey started early and was challenging but rewarding. The juxtaposition of a beautiful saguaro uplands habitat that abruptly ends into a huge mesquite bosque which in turn is next to the cottonwood willow riparian gallery of the San Pedro River creates some unique bird observations. No other place have I heard the mournful cry of a Gray Hawk while I carefully maneuvered through large chollas. We did find our target bird, the desert nesting population of Purple Martin (a Species of Conservation Need for Arizona Game and Fish), in good numbers soaring over the saguaros that they use for nesting, calling constantly. Whenever I see these birds, I am always struck with how large they are. It was very birdy overall with several pleasant surprises such as a Tropical Kingbird sitting in an ocotillo well in the uplands and a Zone-tailed Hawk that slowly soared so low above us, we had great looks without binoculars. It was an amazing day! 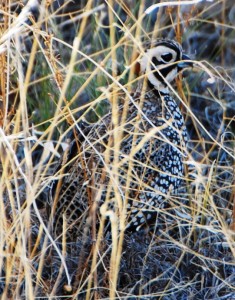 Then I raced back to the IBA office at the Tucson Audubon Society as I was getting picked up that afternoon for another survey, this time at the San Pedro Riparian National Conservation Area (SPRNCA) IBA. That evening we attended orientation at the San Pedro House and went over what we would be doing the next morning. This was a mass survey effort to count enough Bell’s Vireos to qualify this site as a Global IBA. That night, myself and the 4 ladies I was with from Phoenix (Tice Supplee & Sara Porter of Audubon Arizona, Marceline Van de Water, Karen LeFrance and Andree Tarby) camped at the Fairbanks townsite. The next morning we ran our three transects along the San Pedro River and found several Bell’s Vireos and many Lucy’s Warblers (a species that could qualify this site as a continental IBA) and saw many Blue Grosbeaks, a Gray Hawk, Northern Beardless-Tyrannulet among many others. On later follow-up with the organizers of this survey effort, the goal was met for Bell’s Vireos and now we are in the process of applying for Global status for the SPRNCA IBA! 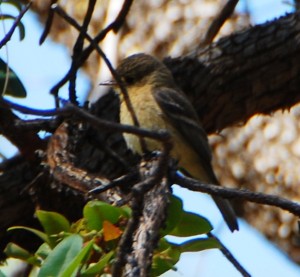 We then began the last leg of our journey and zoomed to the “back side” of the Huchucas via Elgin. On our way to our campsite near the ghost town of Sunnyside we screeched to a halt as Marceline had spotted something on the side of the road. We slowly rolled backward and were rewarded with great looks at a male and female Montezuma Quail (a long term nemesis lifer for me! Horray!) and they even sat still long enough for us to get a few pictures! After we had set up camp we heard several Whiskered Screech-Owls, an Elf Owl and both Mexican Whip-poor-will and Common Poorwill. We then rose early the next morning excited for the Trogon survey we were about to do in Scotia Canyon in 3 teams, before we left our campsite though, we could hear a trogon calling quite close. I was partnered with Andree and things got off to an exciting start when we heard snuffling ahead of us and then suddenly a black 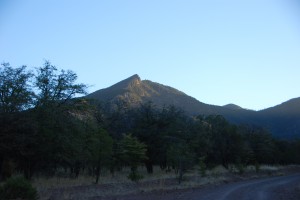 bear ran across the road in front of us no more than 20 meters away. Once our hearts stopped pounding, we heard and then saw a Gray Hawk perched far off in a snag. Then we heard our first trogon calling in the distance. Later when we joined us with another team, the four of us observed a pair of trogons calling back and forth to each other near a large sycamore and then have an altercation with a third trogon. There were also lots of Buff-breasted Flycathcers, Western Wood-pewees, Painted Redstarts, several Sulphur-bellied Flycatchers and several Eastern “Azure” Bluebirds. This was a terrific weekend full of birding action over three different IBAs and three very different habitats.