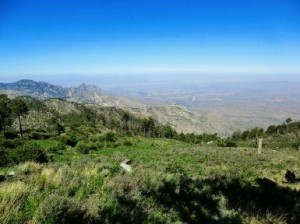 Visiting the IBA: From Tucson: There are several good access points for the public, notably Catalina Highway travels up Mount Lemmon to access the higher elevations of the Santa Catalinas and Cactus Forest Loop Road is excellent access within Saguaro National Park for the Sonoran Uplands habitat within the IBA. Happy Valley Road gives access into Paige Creek and other areas of great sycamore and oak riparian habitat of Happy Valley. Virtually all of this land is open to the public and there are some very well-known recreation areas favored by birders such as Catalina Highway, Happy Valley and many trails in Saguaro National Park. There are also areas in the Rincon Mountain and Catalina Mountains that are difficult to access because of road scarcity but they are not closed to the public.

Virtually all of this land is open to the public and there are some very well-known recreation areas favored by birders such as Catalina Highway, Happy Valley and many trails in Saguaro National Park. There are also areas in the Rincon Mountain and Catalina Mountains that are difficult to access because of road scarcity but they are not closed to the public. 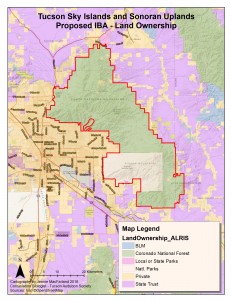 Site Description: This IBA contains a rich assortment of habitat types due to varied elevations that are united in their excellence of habitat and proximity to Tucson: Sonoran Desertscrub and grasslands, Riparian Areas/Corridors and Tinajas, Mixed-conifer forest and Madrean pine-oak woodlands. They are described in more detailed below.

Wildlife in the lower elevations (below 5,000’) is comprised of species typical of the Arizona Upland subdivision of the Sonoran desert. Resident fauna includes such well known and conspicuous species as mule deer, coyote, javelina, diamondback rattlesnake, Gila monsters, roadrunner, Gambel’s quail, and many other bird, mammal and reptile species.  Many rodents (white-throated woodrat, cactus mouse, Harris’ antelope ground squirrel and round-tailed ground squirrel) and other small mammals (desert cottontail) abound.  This portion of Sonoran Uplands habitat on the eastern section of the IBA is one of the few places where all four species of North American skunks (striped, hooded, hog-nosed, and Western spotted) can be found, as well as many other medium-sized carnivores, such as gray fox, bobcat, raccoon, coatimundi, and opossum.  In addition to these more common species, rarer and more reclusive animals, such as mountain lion, badger, Golden Eagle, and groundsnake, are found. Birds that typify this habitat for this nomination include Costa’s Hummingbird, Gilded Flicker and Elf Owl. 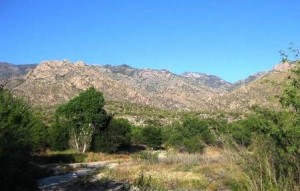 Riparian areas (denser, more structured vegetation associated with surface water and mesic conditions) provide water, food and shelter crucial to sustaining wildlife populations well beyond obligate riparian species. Animals that rely on these areas, particularly at the lower elevations, include aquatic vertebrates (e.g. Sonoran mud turtle and lowland leopard frog) and other amphibians (spadefoots, toads and treefrogs), as well as vital nesting habitat for many bird species. These areas are a vital resource to birds and wildlife in the hot summer months.

Riparian areas are crucial in the desert Southwest not only for the precious water resources they provide and protect, but also for creating habitat “corridors” that facilitate movements of large terrestrial vertebrates (e.g., black bear, mountain lion, and deer) between mountain ranges. 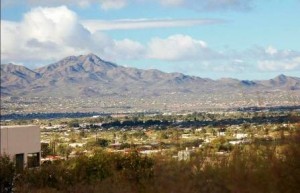 Mixed-conifer forest and Madrean pine-oak woodlands support a unique and diverse avian community. This avian community is vulnerable to disturbance because the area encompassed by montane forests represents only a small fraction of the total landmass of the region. Moreover, the highest densities of breeding birds in the Santa Catalina Mountains are concentrated in a relatively small number of drainages that contain montane riparian vegetation. In recent years, the potential for disturbance to these important breeding areas has increased dramatically. We lack not only a clear understanding of the potential impact of these threats on forest birds in southeastern Arizona but also basic information on the population status, reproductive success, and habitat needs for the vast majority of these species. IBA bird species associated with this habitat include Wild Turkey, Red-faced Warbler, Grace’s Warbler, Olive Warbler, Buff-breasted Flycatcher, Elf Owl, Whiskered Screech-Owl and Mexican Spotted Owl 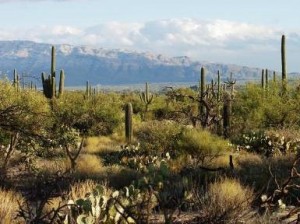 Southeastern Arizona is largely desertscrub and desert grassland interspersed with mountain ranges with elevations of up to 10,000’, including the Rincons. These mountains support woodlands and forests, including pine-oak, pine, and mixed conifer, and provide habitat for a suite of wildlife species that otherwise seem incongruous to the region. Examples include black bear, white-tailed deer, coatimundi, Arizona gray squirrel, cliff chipmunk, Madrean alligator lizard, greater short-horned lizard, Arizona black rattlesnake, Northern Goshawk, Yellow-eyed Junco, Wild Turkey, and a host of neotropical migratory bird species, including Elegant Trogon, Olive Warbler, Red-faced Warbler, Grace’s Warbler, Mexican Spotted Owl and Buff-breasted Flycatcher. Due to their limited and disjunct habitats in the region, these species are of special management concern. 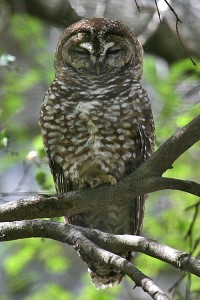 Conservation: This area is used for many purposes and its proximity to Arizona’s second largest city has caused it to be used heavily for recreation. The National Forest portion of the IBA is used for recreation and logging. The small portion of BLM land does have some grazing, but the main use of this entire IBA is habitat preservation and recreation. Land use is approximately 80% recreation, 10% logging, 5% transportation and 5% grazing.

The main threats to this area are fire, recreation, invasive species and urban impacts. Fuel buildup is a concern in this portion of the Coronado National Forest and in 2003 the Aspen Fire burned 84,750 acres of forest in the Santa Catalinas. Recreation and road disturbance also have a notable impact on this habitat. The biggest threat to the saguaro uplands habitat of the IBA is urban encroachment and development. With this influx of people has come another threat to the saguaro – exotic plants. Exotic plants almost always out-compete native plants for the limited resources of water and nutrients. Exotic plants – particularly buffelgrass, fountain grass, and red brome – have also led to an increase in wildfires in the desert, which harm or kill native vegetation, including the saguaro 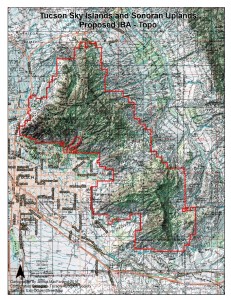 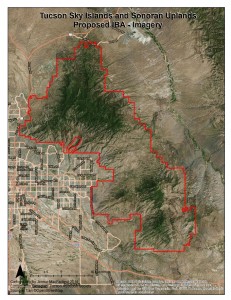 Ornithological Summary: This IBA is qualified for Global status for Mexican Spotted Owl and could qualify for Continental status for Gilded Flicker, Elf Owl and Black-chinned Sparrow. 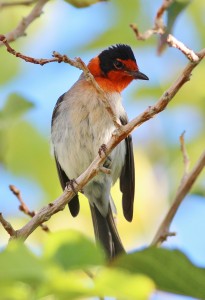 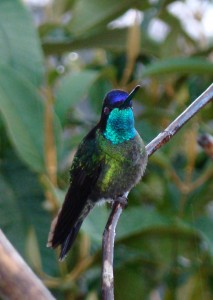 This IBA is excellent habitat for many species of warbler including Lucy’s Warbler and Yellow Warbler (eBird high count 20) in the desert habitat and mesquite habitat that spans up into medium elevations. The higher elevations of the IBA are excellent for the charismatic Red-faced Warbler and SE AZ specialty birds, the Olive Warbler and Grace’s Warbler. Other warblers found within these different life zones include Black-throated Gray Warbler in many habitats, MacGillivray’s Warbler breeding at high elevations and migrating at all elevations and Virginia’s Warblers (eBird high count 26)  in the oak habitat. In the lower zones there are Abert’s Towhees and in several different elevational zones there are Canyon Towhees. This area is also great for sparrows including Rufous-crowned Sparrows on rocky slopes and SE Arizona’s specialty sparrow, the Rufous-crowned Sparrow  and in the winter significant numbers of Brewer’s Sparrows in different elevation zones.