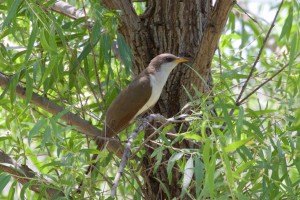 I am a University of Arizona student majoring in Wildlife Conservation and Management. After I took an ornithology class, I fell in love with birds. Before, I didn’t even notice how many beautiful avian species we have in Tucson. Soon I became an avid birder. I took it as an entertaining game. You see a bird and you test your knowledge and spotting skills trying to identify it. It became a sort of a bird bingo. It was so fun to be able to update my bird checklist. Even when I could not identify a bird from memory, I found it entertaining to go through my field guide and find the correct species. I do wish I had perfect photographic memory, but that would be too easy. Right?

After the semester was over I applied for an internship with Tucson Audubon Society. And I am so glad I did! I got involved in one the projects Audubon was working on at the time: Coronado National Forest Western Yellow-billed Cuckoo Surveys. 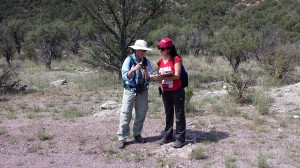 Right away I was able to go on surveys and assist with cuckoo detections. Jennie MacFarland showed me the ropes and patiently answered all of my questions.

With a permit from the USFWS and partnering with the Coronado National Forest, we were allowed to play a territorial call of a Yellow-billed Cuckoo in order to observe a visual or auditory response from the cuckoos in the area.

One of the surveys that stood out to me the most was one of my very first: Collins Canyon, Canelo Hills. Despite it being mid-August, the riparian area felt comfortably cool. The place was surrounded by dense vegetation and running water: a perfect habitat for many birds. It felt like a great morning hike on a beautiful trail, but it was even better than that because we were working on a great cause of outlining a preferred habitat for a Threatened avian species. 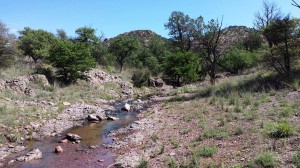 Collin’s Canyon in the Canelo Hills by J. MacFarland

During one of our first stops a female Elegant Trogon seemed to have swooped at us when we played a Cuckoo call. This example, along with other evidence led us to believe that there could be territoriality between the two species. Other interesting bird species that I was able to add to my checklist include: Northern Flicker, Mexican Jay, Bridled Titmouse, Yellow-billed Cuckoo, White-breasted Nuthatch, Spotted Towhee, Red-winged Blackbird as well as other equally great species! 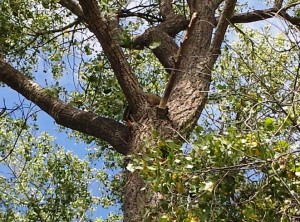 We even spotted a raccoon having a snooze on a tree. Although he was pretty high up I was able to take a picture of him though my binoculars.

When we got back from our transect we met up with the rest of our crew at the Parker Canyon Lake. More than 70 Barn Swallows were flying around the lake. I also saw at least 15 nests each witsh 3-4 babies at just one of the buildings on shore.