On the cold morning of December 9th, 2011, two members of the AZ IBA team headed out to search for Grey Vireos. This endeavor was part of a larger effort organized by Arizona 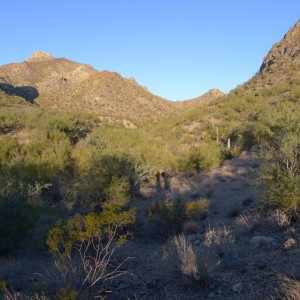 Field Ornithologists to determine where this species winters in Arizona. It has been documented that the winter range of this species is closely tied to the occurrence of Elephant Trees (Bursera microphylla) which produce a red fruit on which the vireos feed. This means that the species switches from its diet of insects in the breeding season to fruit in the winter, a rather unusual strategy in the avian world. 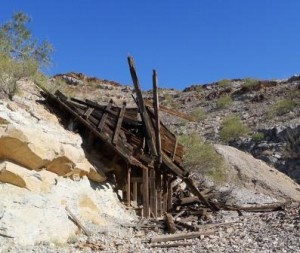 This coordinated effort had teams searching for the Grey Vireos in locations where Elephant Trees are documented, but not Grey Vireos. Tim Helntjaris and I headed out to our assigned area of the Waterman Mountains in Ironwood National Monument. I had never been out here and was astonished by the beautiful views and the remote feeling of the area. This area seems like true wilderness with few roads and limited access. There are however, abandoned mining sites that are a harsh reminder of this areas exploitative past. 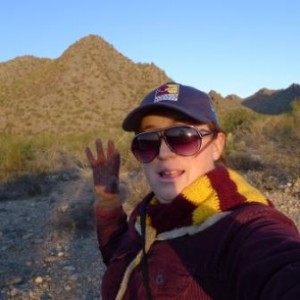 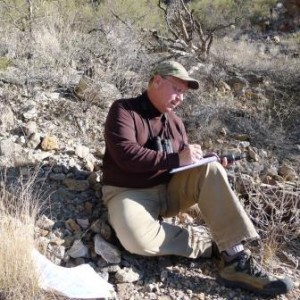 The most difficult part of this adventure was getting to our survey location which required a rather long walk through difficult terrain covered in pokey plants. The maps showed an old road, suitable for walking but not driving, that ran rather near our survey points, but we could not find it. As we bushwhacked through the desert and towards our points, we did observe some birds. There were Verdins everywhere and Phainopeplas gave their whoop call from several directions. One of the best sightings was a small group of Western Bluebirds foraging in the desert and an energetic Ruby-crowned Kinglet. Once we finally did reach our points, it was very easy to see the road we had been looking for. At least we could use it to get down when we were done.

Now it was time to conduct our surveys. There were indeed many Elephant Trees present in the area, but they all appeared to have died back, most likely due to the hard frost of last winter. At first, Tim and I despaired that they were 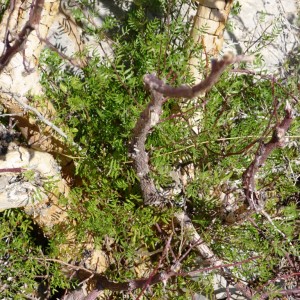 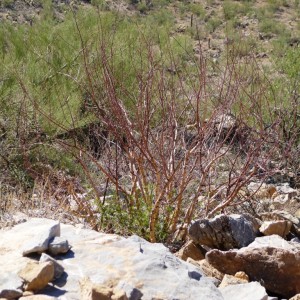 dead. Then we noticed that almost all of them did have shoots growing from the base covered in leaves! While none of the trees had any fruits and we did not find any Grey Vireos on our surveys, perhaps the Elephant Trees will have recovered enough by next winter to produce fruits. Then maybe there will be Grey Vireos there to feast upon them!