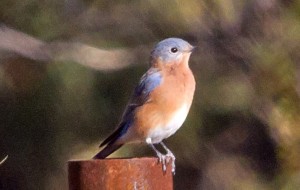 For the first time the Arizona IBA program held an “all bluebird” survey of an area we have surveyed quite a bit, the Patagonia Mountains on Saturday October 26, 2013. Our target bird, the charming Eastern Bluebird, has an interesting background here in SE Arizona. The population here in some of our SE AZ “sky islands” is part of the sub species of Eastern Bluebird known both as Azure Bluebird and Mexican Bluebird (Sialia sialis fulva). Its range finds its northern limits here in the Huachuca Mountains, the Patagonia Mountains and adjoining areas such as the San Rafael Grasslands. Their range is larger than this area and extends south into Mexico in the Sierra Madre Occidental, a chain of Sky Islands that extends across the international border much like the Sky Islands we are familiar with here in Arizona. This is a special little bird that is actually not very well studied or understood. It has some range and behavioral difference from the main population of Eastern Bluebirds, it doesn’t migrate and notably, there are some physical differences as well. This fulva subspecies, here after called Azure Bluebirds, is overall a paler version of “normal” Eastern Bluebirds.” 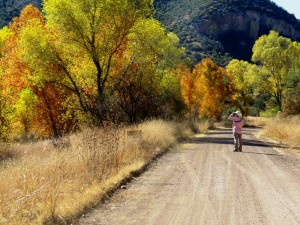 Beautiful habitat of the Patagonia Mountains by Kate Reynolds

Not much is known about this species and getting a recording of an Azure Bluebird proved impossible. What we mainly observed in the field was a musical, rising “chur-lee” with a “tu-a-wee” being the alternate description. 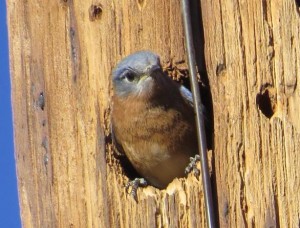 When it came to correctly identifying the Azure Bluebirds, the big things to note here is the extent of the blue on the head (Eastern and Azure have reddish cheeks and Westerns have all blue heads) and the fact that Azure (and Eastern) Bluebirds have white tummies (this is also clear in females) and Western Bluebirds have gray tummies. Also this time of year Westerns tend to flock and Azures not so much. 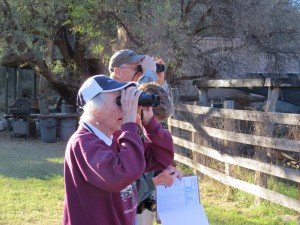 The protocol for this survey was relaxed and easy. Each team had a section of road assigned to them and spent the morning driving down that section and pulling off anytime the habitat looks good and getting out and looking around. The biggest things we recorded were the time and how many Azure Bluebirds were observed (with male, female etc. if you can tell) and any notes about what they are doing. Each team also kept a species list of all birds they encountered and were able to identify. 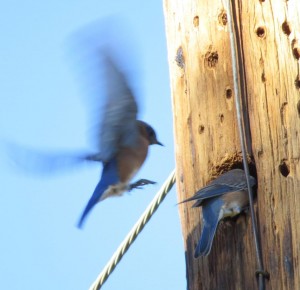 We did quite well on this survey – we recorded a total of 42 Eastern “Azure” Bluebirds and some in areas they had not been previously reported. One team found a group of 5 Azure Bluebirds at Spirit Tree B&B that were showing breeding behavior! They were entering a cavity entrance in a telephone pole carrying insects, at one point both the male and the female were in the cavity together! The second team (Harshaw Road to Mowry Wash) did quite well with several small groups and pairs nicely distributed throughout the route with a large group of both Azure and Western Bluebirds using the excellent habitat at Guajalote Flat. We conservatively counted 10 Azure Bluebirds and 18 Westerns at this one spot alone. This route had a total of 22 Azure Bluebirds. The third team covered the San Rafael Valley Road and Corral Canyon. They did quite well with 15 Azure Bluebirds recorded and 9 of these were at the entrance to Corral Canyon. Here they spotted an unexpected and exceedingly rare bird, a Blue Jay! You know, the Blue Jay of the Eastern US! An incredible find and they also got terrific photos which can be seen here: http://www.flickr.com/photos/loismanow/10501611594/