On the weekends of June 1-2 and June 8-9, 2013 some 79 volunteers turned out to census Elegant Trogons in all 5 border ranges in Southeastern Arizona where they are known to occur. Counters recorded all visual and audio observations in their territories from 6-11 a.m. By comparing times and locations of observations I was able to deduce the minimum number of Elegant Trogons present. Altogether 86 Elegant Trogons were documented: 49 males, 22 females, and 15 unknowns not assigned to gender because they were heard but not seen. All females were in proximity to males with whom they were assumed to be paired, yielding a total of 22 probable pairs. Eighty-six (86) represents the minimum known population of Elegant Trogons in the border mountains of Southeastern Arizona as of June 9, 2013.

These results probably do not fully account for all female trogons present. At this time of year many female trogons are incubating eggs or brooding chicks for most of the morning. Based the behaviors of male trogons during the census, as well as incidental observations just prior to the counts in the respective mountain areas, an additional 11 trogons that were neither seen nor heard by the counters were thought to be present. These birds that escaped detection during the actual census are shown in parentheses in the table below. The areas selected for this count were canyons from which Elegant Trogons are historically known. It is important to note, however, that with only 79 volunteer counters, a few canyons where trogons are either known or are suspected to have occurred in all five mountains were not surveyed for Elegant Trogons this June. All of these canyons are thought to be peripheral areas where probably no more than 1 pair—or conceivably 2 pairs—could be present. In the majority of these canyons probably none are present. Obviously more volunteer counters would be desirable to improve coverage of potential Elegant Trogon habitat in the future.

Santa Rita Mountains. Conducting research for the US Forest Service, I personally estimated 8-12 birds were using Madera Canyon in the late 1970s and early 1980s, as well as 1 pair in Cave Canyon, 1 pair in Garden Canyon, and 2-3 pairs in Josephine Canyon. These results largely agree with those of Linnea S. Hall (unpublished dissertation, U. of Arizona, 1996), who also found Elegant Trogons in Temporal Gulch in 1993 and 1994, and using Big Casa Blanca Canyon in 1994 and 1995. This June count teams recorded 11 Elegant Trogons using Madera Canyon, as well as additional birds in Cave Canyon (1 pair) and Temporal Gulch (2 pairs). Although no trogons were detected in Josephine Canyon on the actual survey, 2 trogons were found there on 5/29/2013. It appears that Elegant Trogon populations in the Santa Rita Mountains are stable. 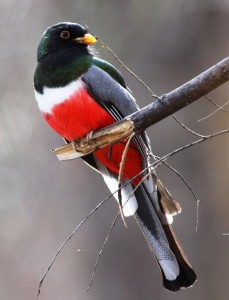 Directly through habitat destruction, or indirectly through watershed degradation, fuel reduction activities, actual fire suppression, or a combination of these and other factors, the 2011 Horseshoe Two Fire apparently continues to have a negative impact on Elegant Trogon populations in the S. Fork-Cave Creek Canyon complex of the Chiricahua Mountains. At present the S. Fork-Cave Creek area appears to be the only canyon system within its U.S. range where Elegant Trogons have suffered a clear and significant decline.