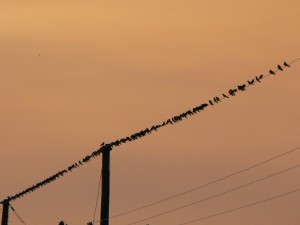 As this summer’s heat fades into fragrant fall with migration just around the corner there is a twinge of sadness that the Important Bird Area field season is winding down. It is also incredibly gratifying to look back over the last several months and review some of the amazing observations the Arizona IBA crew had this summer. Much of the summer survey work happened along the Lower San Pedro River north of Tucson near San Manuel. This portion of the San Pedro River is stunningly beautiful and ecologically rich with thick riparian vegetation and lots of birds and wildlife. This summer was the second year we conducted Yellow-billed Cuckoo surveys in this area and found even more breeding occurrences than last year. 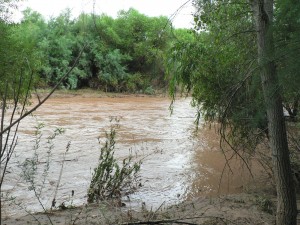 Our western subspecies of this bird is of very high conservation concern due to severe habitat loss and we found them on each of our three survey mornings along the Lower San Pedro. These birds are notoriously shy and often avoid detection during an all-bird survey. To get an accurate picture of how many cuckoos are using this habitat to nest we used a call-back protocol where we played to call of a Yellow-billed Cuckoo over small speakers and waited for the territorial birds to respond. They are so good at hiding that sometimes we would hear them right over us, calling loudly but couldn’t see them, an amazing feat for a 10-12 inch long bird in a cottonwood! This season we found at least 10 separate breeding territories along 5 km of this excellent riparian habitat. This is an excellent result and if further proof of the importance of the Lower San Pedro River Global IBA to native birds. 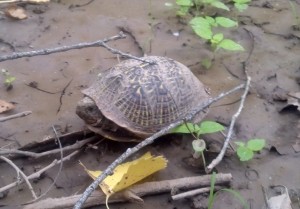 Our summer time season along the San Pedro was characterized by many amazing encounters including fresh Black Bear tracks, a troop of White-nosed Coatis, Box Turtle and numerous rattlesnakes, both Mohave and Western Diamond Back. There were also many adventures including a survey where the river was so high that most roads were impassable (though one team did get their car stuck in the mud but managed to free themselves!) and two separate owl/nightjar surveys where an alarming and mysterious sound was heard. One team though it was a mountain lion or bob cat while the other team later in the season swore it sounded like a black bear snuffling very close by. Both teams ended up finishing that nocturnal point count from inside the car with the windows open!

Coati on the Lower San Pedro

With all of the amazing sights and sounds our team encountered this summer, one of the most amazing was the Purple Martins. The Purple Martins here in SE Arizona are quite different from those that live in the Eastern U.S. with a different way of going about nesting. They don’t live in large “bird hotels” put up by people, they prefer to nest in saguaro cavities that occur near riparian areas where they can hunt for insects.The Lower San Pedro River is perfect for these desert nesting Purple Martins as there are extensive saguaro uplands that come quite close to the lush riparian zone. We would occasionally see them on our other surveys soaring over the river emitting their strange static-like call and this was the first year we tried to get a sense of how many are nesting in the area. The results were nothing short of staggering, especially during the June survey. We drove River Road north and east of the San Pedro in the evening and within 5 miles of driving counted well over one thousand Purple Martins sitting on telephone wires and soaring over the saguaro uplands. This road runs parallel to the river right where the mesquite bosque ends and the desert uplands begin so is ideal for counting these birds. To see this relatively rare subspecies in such large numbers was surprising, we will definitely be investigating this more closely next year. 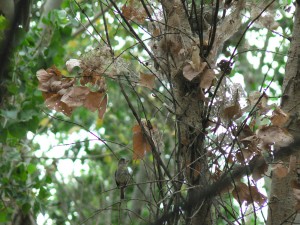 Northern Beardless Tyrannulet with nest in a tent caterpillar web