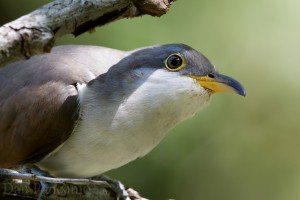 Tucson Audubon is coordinating surveys in three mountain ranges for a total of nine routes. There is a separate effort also happening this summer in SE Arizona coordinated by Nick Beauregard out of NAU with support from USFWS and other partners. See more about this effort here.

All information below is for the Tucson Audubon survey effort.

This will be our main hub for this project in July – August 2019 as we survey 9 total routes in the three SE Arizona “Sky Island” areas:

Tucson Audubon has been given an excellent opportunity to monitor Western Yellow-billed Cuckoos in the Sky Islands of the Coronado National Forest for a fourth year. We are focusing on further demonstrating that these Threatened birds use Madrean Sky Island habitat to nest.

It could have real conservation outcomes, including increased Critical Habitat designated for this species! We can use your help!

If you will be in southern Arizona through most of the summer and are a reasonably strong hiker, you are qualified to help us! You do not need advanced bird ID skills.

The following are resources that you will need as a volunteer surveyor:

Here is the link to download the official protocol in pdf format:

You need to download this protocol and read through it – you do not need to print the whole thing but the first 20 pages are very interesting and relevant if you do want to print part of it out.

Here is the link to download the official mp3 survey audio file.

Here is a link to download both data forms that you will need for the Yellow-billed Cuckoo Call Back Survey plus a checklist of all other bird species detected on the survey.

Here are some very important videos that you need to watch if you are going to be a part of these surveys. The first three are from a workshop I held in June 2015 at a local public library. This is my first attempt at making and posting videos so please excuse the poor lighting – though I think the sound is quite good. This first video talks about the project itself and why we are doing these surveys.

(There is about a minute of the beginning of this video where the image is red and an error screen – the audio continues to work though – it begins working again very soon and you are not missing anything visually while I summarize what the Important Bird Areas program is – sorry again, my first video attempt!)

Yellow-billed Cuckoo Survey Data Sheets – How to Fill Them Out!

Outdoors survey Example: How to actually conduct the survey 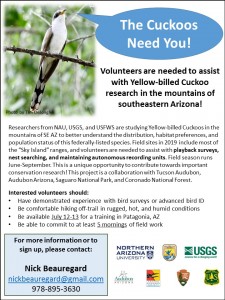