Two of Arizona’s 48 Important Bird Areas (IBAs) center on native grassland, and both have qualified for Global IBA status due to significant populations of wintering Chestnut-collared Longspurs. The San Rafael Grasslands IBA and Las Cienegas National Conservation Area IBA are mainly comprised of healthy Chihuahuan grassland habitat that has abundant summer breeders such as Botteri’s and Cassin’s Sparrows. They also support many wintering sparrows and other grassland-associated birds. Tucson Audubon is one of two partner organizations (along with Audubon Arizona) that coordinate the Arizona IBA program. We are responsible for monitoring wintering Chestnut-collared Longspur at these sites, which is a species of regional concern for the Sonoran Joint Venture. We have led volunteer birders on annual group surveys of San Rafael Grasslands since 2010 and Las Cienegas since 2015. 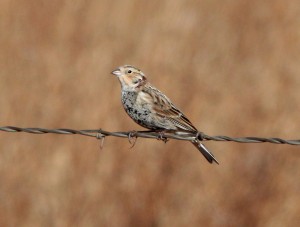 Chestnut-collared Longspur (Calcarius ornatus) is a charismatic grassland bird that has declined by more than 87% since 1966, with an estimated 33% decline within 2003-2015. It has been listed as Near Threatened since 2004 on the International Union for Conservation of Nature (IUCN) Red List and this year was elevated to Vulnerable status, which is one step below Endangered. Chestnut-collared Longspurs nest in the Great Plains in north-central U.S. and winter in short grass prairie and desert grassland in the American southwest and north-central Mexico. The species’ dramatic decline is largely due to habitat loss, both on its breeding grounds and wintering grounds. Much of the prairie it needs to nest has been converted to croplands and urban areas, or has been otherwise fragmented by activities such as fracking, making what habitat remains less suitable. Essential wintering areas have also deteriorated, especially in Mexico where many formerly suitable wintering grasslands have been converted to irrigated agriculture. IUCN predicts that a decline in this species’ population will continue into the future. National Audubon’s large-scale climate change and associated habitat change prediction model shows likely additional pressure in the future with a decrease in suitable breeding and wintering habitat. Click here for more information about threats to Chestnut-collared Longspur from Bird Life International. 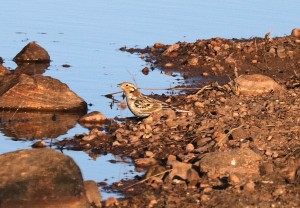 Chestnut-collared Longspur drinking from a tank. Photo by AlanSchmierer

One result of this distressing population decline is that this species – of Global IBA significance – has become a top priority for the Arizona IBA program. Tucson Audubon staff and volunteers will continue to monitor both San Rafael Grasslands IBA and Las Cienegas IBA, and as of 2017, we have increased the number of coordinated group surveys to a minimum of two each winter. We will also encourage the many birders that live or winter in southern Arizona to carefully document any groups of Chestnut-collared Longspurs they encounter using eBird. Tucson Audubon is testing some different survey strategies to increase our understanding of how southeast Arizona’s Chestnut-collared Longspurs utilize grasslands. This winter we will be placing Wildlife Acoustics SM4 recorders, and possibly wildlife camera traps, near cattle tanks in Las Cienegas to gather information on how frequently flocks of Chestnut-collared Longspurs come in to drink. This species is very wary, making it difficult to gather information using traditional observation methods, especially since areas with cattle tanks offer very little opportunity for surveyors to hide from the birds. We will also be gathering information about the tanks themselves, to try to determine what features the most visited tanks have in common. The long-term goal would be to provide management recommendations to land owners and land managers about how to make tanks or ponds more useful to wintering longspur flocks.