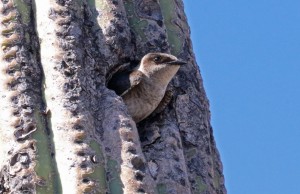 Have you ever seen a Purple Martin in Southeast Arizona? These charismatic, large swallows are a beloved and iconic nestbox species in the eastern half of the United States but if you know where to look they can be found here as well. The Desert Purple Martin is a distinct subspecies that timing their nesting to monsoon abundance and nests almost exclusively in saguaros or other large columnar cacti. They are “wild” martins that use naturally occurring cavities while the eastern subspecies is said to be entirely reliant on human-made nestboxes. The Desert Purple Martins are extremely understudied with large gaps in knowledge about their nesting, migration and wintering grounds. This summer Tucson Audubon is launching a study on these fascinating birds and we could use your help.

Here are the different ways you can help:

1) If you see or hear Purple Martins anywhere in southeast Arizona please report them here or enter your sightings into eBird.org
https://forms.gle/RsBxAfJD8Qv31jdEA

2) Report a nesting colony of Purple Martins. Desert Purple Martins are loosely colonial which means that multiple pairs will form a community and nest in the same stand of saguaros, often in excellent Sonoran Desert habitat. If you know of a nesting colony on your own property or in an area that is accessible to the public please let us know here. We do have several endoscopes and long poles we can use to peek into nests and gather data!
https://forms.gle/59dG4THDhNgMPhjE9

3) Join Tucson Audubon’s Community Science Purple Martin Project. Participants will have the opportunity to observe and monitor nesting colonies of Desert Purple Martins in publicly accessible areas or on their own properties if applicable. We may also have group excursions into larger areas to look for colonies. Join the team here.
https://tas.z2systems.com/event.jsp?event=6661&

4) Find a feather from a Desert Purple Martin: If you find what you believe to be Desert Purple Martin feathers near a known nesting location or a dead Purple Martin please let us know immediately. We have partners that can do lab analysis on these feathers and learn about the genetics of this distinct subspecies and maybe determine where the birds wintered or migrated through using stable isotope analysis. You could be a part of an important scientific discovery! Let Jennie know if you have a feather at jmacfarland@tucsonaudubon.org

Information for Surveyors – For Members of the Desert PUMA Crew

Directions for watching and monitoring a nesting colony

Protocol Document – Can be viewed and printed here

Data Form Document – Can be viewed and printed here

Desert Purple Martins have VERY different behavior from the Eastern sub-species. The Desert Purple Martins are vastly understudied and very limited in their breeding range as they are restrcited to areas with either Saguaro or other large columnar cacti such as cardon, with woodpecker holes, their preferred nesting sites. It is important to also be aware that a second subspecies of Purple Martin occurs in Arizona. They are a forest nesting subspecies (Progne subis arboricola) that can be found in central AZ in Ponderosa Pine forest using woodpecker holes and can be found as far north as Washington State and British Columbia.

Migration Habits: The Desert Purple Martins have a very different migration pattern than other sub-species. There are still scientific knowledge gaps about the migration routes and wintering areas for Desert Purple Martins but they arrive much later in the US than other subspecies and seem to timing their arrival to take advantage of our monsoon abundance for their nesting.

Nesting Habits: Desert Purple Martins have a very different strategy for nesting than the rest of the species. They have never been documented using human made nesting structures and nest almost exclusively in cavities, usually made by woodpeckers, in saguaros in Arizona (cavity height above the ground ranging from 15-35 feet, average of 24 ft) or in cardon cactus in Mexico. According to the Arizona Breeding Bird Atlas, Desert Purple Martins have the following breeding time frames: They become common in breeding areas around mid-May and are often observed defending nesting saguaros throughout June. Observations of birds carrying nesting material in June seem to be linked to nest site investigation and guarding behavior of preferred saguaros instead of actual nesting.  They don’t lay eggs until early or mid July based on observations in the Tucson area. Young have been detected in nests of Desert Purple Martins from July 30 to August 21.

Migration: Late August into September, Desert Purple Martins begin to gather into larger groups and prepare for their fall migration. Large groups gathering together in the evenings to communally roost has been documented in the Tucson area and Tucson Audubon will be soliciting observations of this behavior this late summer into Autumn. By early October, many of the Purple Martins have left Arizona but they are frequently seen in smaller numbers into late October.

Montage of Purple Martins at Greasewood Park in Tucson. Video by Richard Fray

Pair at nesting saguaro at TAS Mason Center. Note how pale the female is in color. Video by Zach Steinhauser as seen in Purple Haze: A Conservation Film

Desert Purple Martin female peeking out of a nesting cavity at TAS Mason Center. Video by Zach Steinhauser as seen in Purple Haze: A Conservation Film

Desert Purple Martin pair at nesting saguaro in Greasewood Park. The female is peeking out of a cavity on the left, and her apparent mate, a immature plumage male, is sitting on the saguaro arm on the right. Note the very distinctive vocalizations at the end of the clip. Video by Richard Fray