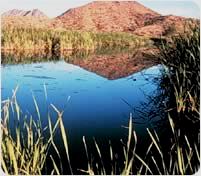 Site Description: The Quigley Wildlife Management Area (QWMA) is owned and managed by the Arizona Game and Fish Department. It is located along the lower Gila River 40 miles east of Yuma and just north of the town of Tacna and contains approximately 622 acres consisting of 1) 2 major open water areas, occupying approximately 18 acres (3%), 2) 60 acres (11%) of idle farmland 3) 85 acres (16%) of upland habitat characterized by large stands of saltcedar (Tamarix chinensis) and arrowweed (Tessaria sericea); 4) about 95 acres (18%) of Creosotebush-bursage habitat; 5) 100 acres (19%) of marshland habitat, associated with the open water areas and characterized by emergent vegetation such as cattail (Typha domingensis) and bulrush (Scirpus californicus) 6) and the remainder of the QWMA is characterized by dense stands of saltcedar and arrowweed, covering approximately 180 acres (33%). Prominent features include oxbow ponds and associated marshes and riparian areas, irrigated fields planted with wheat for doves in the summer and moist soil waterfowl foods in the winter, and irrigated stands of cottonwoods and willows. More information about QWMA can be found at: http://www.azgfd.gov/outdoor_recreation/wildlife_area_quigley.shtml 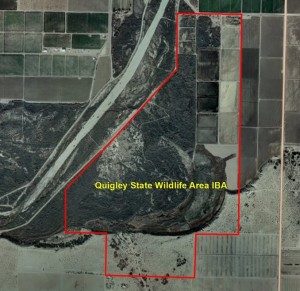 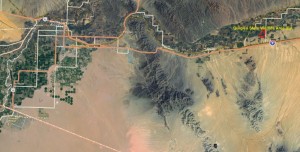 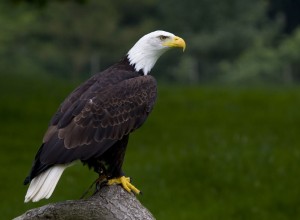 Floodplain/Wetland Habitat Species – Wetland and riparian habitats within the QWMA provide critical nesting, cover and food resources for many avian species. Wetland habitat of open water and marshlands within the wildlife area is associated with a series of ponds located in an old oxbow channel of the Gila River. The low water depths and emergent vegetation such as cattail (Typha domingensis) and bulrush (Scirpus californicus) make excellent nesting substrate for a large number of waterfowl species. Other wildlife species supported by the wetlands at QWMA include shorebirds, game and nongame fishes, game and nongame birds, and amphibians. The marsh habitat at QWMA has in the past supported at least 4-6 pairs of the endangered Yuma Clapper Rail (Rallus longirostris yumanensis) and appropriate habitat exists for the endangered Southwestern Willow Flycatcher (Empidonax traillii extimus), although nesting has not been documented.

Idle Farmland Habitat Species – About 60 acres of unplanted agricultural fields are located in the northeastern portion of the QWMA. This land was most recently used to grow bermuda grass (Cynodon dactylon), but has been fallow and weed-covered for several years. Floods along the lower Gila River in the spring of 1993 impacted this zone and now stands of cattail interspersed with Goodding willow (Salix gooddingii) and open areas dominated by bermuda grass as a result of the floods, making the idle fields more suitable for supporting wildlife.

Active Farmland Habitat Species – The Marlatt addition (60 acres) is currently in active agricultural production. Crops grown in the past included bermuda grass, cotton, seed onions, and various produce. Currently, this area is being farmed for wheat (Triticum spp.) to support white-winged (Zenaida asiatica) and mourning doves (Zenaida macroura). Approximately five percent of this portion of the QWMA property consists of border roads, berms, and water-delivery ditches. Except when flood-irrigated, habitat quality for wildlife species is low, as crops currently grown are of low food and cover value. The agricultural land is relatively productive, however, and shows a high potential value to wildlife if it were utilized to grow grain or other forage crops. 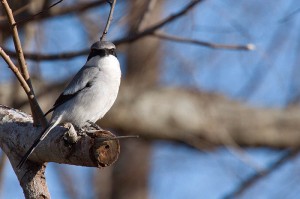 Conservation Issues: The dominant continuing threat is competition from salt cedar over native riparian vegetation, but revegetation projects for cottonwoods and willows have been implemented. Water levels in the ponds have declined in recent years as adjacent agriculture has been retired; use of canal water has replaced some of this lost water. Other threats are from wildfire and cowbirds. More conversion of salt cedar to native vegetation would further improve habitat, and reduce fire threat and cowbird parasitism impact.