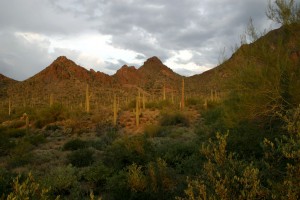 Visiting the IBA: From Tucson: Located west of Tucson and can be easily accessed via Speedway to Kinney or from the northwest via Picture Rocks Rd. Virtually all of this land is open to the public and there are some very well-known recreation areas favored by birders such as Gates Pass, the Arizona Sonora Desert Museum, the David Yetman Trail, and many trails in Saguaro National Park. 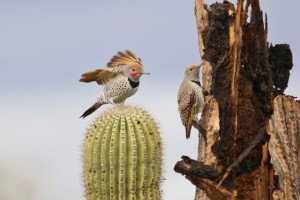 The Sonoran Desert has a greater diversity of life forms and plant communities than the other North American deserts. The Tucson Mountains are a small, isolated desert range west of Tucson in southern Arizona. Some of the densest stands of saguaro to be found anywhere on earth are within this IBA. The Tucson Mountains are a floristically rich area due to several factors, especially geographic location, elevational range, and habitat diversity. Biseasonal rainfall, relatively mild winters, and a range of microclimates and habitats help to support a diverse flora and fauna. The many winter & spring annuals in the flora reflect strong ties with the Mohave Desert in addition to the dominant Sonoran Desert influence of this area. The combination of mild winters with infrequent, modest freezes of short duration, the hot, dry arid foresummer, and summer rainfall favors cacti and subtropical desertscrub species such as ironwood.

The Tucson Mountains are in a complex transition zone between several phytogeographic provinces and biotic communities. The range is located in the Arizona Upland, a subdivision of the Sonoran Desert characterized by diverse floras rich in trees and succulents with strong ties to Sinaloan thornscrub in Sonora. The upper portions of the range support local areas of desert grassland.

The Tucson Mountains, which Arizona-Sonora Desert Museum research scientists recently inventoried with a number of their colleagues. In an area of less than forty square miles (100 km2), this botany team encountered over 630 plant species-as rich a local assortment of plants as any desert flora known. This small area contains roughly one-sixth of the Sonoran Desert’s entire plant diversity. It is disproportionately rich relative to its size, its paucity of surface water, and its elevational range. 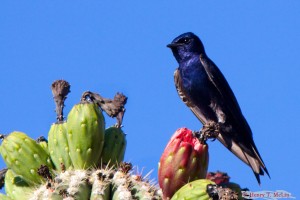 Conservation Issues: This area is used for many purposes and its proximity to Arizona’s second largest city has caused it to be used heavily for recreation. The National Forest portion of this IBA is used for recreation and logging. The small portion of BLM land does have some grazing, but the main use of this entire IBA is habitat preservation and recreation. Land use is approximately 80% recreation, 10% transportation and 10% grazing.

Other issues include invasive species, fire and habitat fragmentation caused by urbanization. 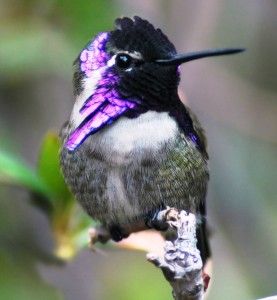 Conservation International has estimated that as much as sixty percent of the entire Sonoran Desert surface is no longer covered with native vegetation but is dominated by the 380-some alien species introduced to the region by humans and their livestock. Alien plants such as buffelgrass now cover more than 1,400,000 acres of the region, at the expense of both native plants and animals. Tamarisk trees choke out native willow and cottonwood seedlings. Invasive weeds such as Johnson grass and Sahara mustard have taken over much of certain wildlife sanctuaries and parks in the desert, outcompeting rare native species. Other invasive species such as Africanized bees and cowbirds also compete with the native fauna. Biological invasions are now rated among the top ten threats to the integrity of Sonoran Desert ecosystems, whereas a half century ago they hardly concerned ecologists working in the region. These invaders somehow reach even the most remote stretches of the desert, to the point of being ubiquitous.
The wholesale replacement of natives by aliens is enough of a problem, but desert biodiversity has been even more profoundly affected by habitat fragmentation – the fracturing of large tracts of desert into pieces so small that they cannot sustain the interactions among plant, pollinator, and seed disperser. Such fragmentation does not necessarily lead to immediate extinctions, just declines-there is a time lag before a species’ loss of interactions with others leads to complete reproductive failure. Fragmentation caused by urbanization is now considered the number-one threat to the biodiversity of the region and is not expected to diminish during our lifetimes. 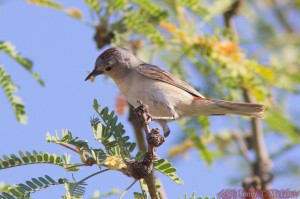 In a sense, humans are making the Sonoran Desert much more like the old (and erroneous) stereotype of a barren wasteland. As more than forty dams were constructed along rivers in this century, old-timers witnessed hundreds of miles of riparian corridors dry up. Groundwater overdraft has also impoverished desert and riparian vegetation, as farms and cities pump millions more acre-feet out of the ground than rainfall in the region can naturally recharge. The roots of plants are left high and dry above the water table. Most of the Sonoran Desert was not at all naturally barren, but our misunderstandings have impoverished one of the richest arid landscapes on the planet.

Threats and Conservation: Impacts from recreation is a major conservation issue as is urban encroachment. Large scale fires from forest management decisions is also a concern. Tucson is working on managing these issues through the Sonoran Desert Conservation Plan and the forest issues are being looked at now by Coronado National Forest.

Buffelgrass is a major threat to the saguaro uplands habitat as it changes the fire regime and intensity of blazes that kills native plants, especially cacti. The National Park Service is currently attempting to slow the spread of this invasive grass with various methods of control. 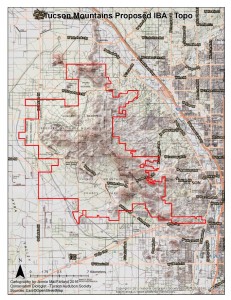 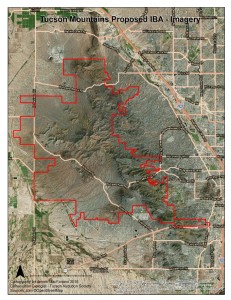 D3: Rare, Unique, or Exceptional Representative Habitat/Ecological Community – Upland Sonoran Desert – some of the densest stands of saguaros in the world. 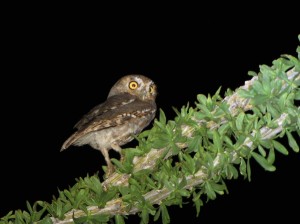 Wildlife in the lower elevations (below 5,000’) is comprised of species typical of the Arizona Upland subdivision of the Sonoran desert. Resident fauna includes such well known and conspicuous species as mule deer, coyote, javelina, diamondback rattlesnake, Gila monsters, roadrunner, Gambel’s quail, and many other bird, mammal and reptile species.  Many rodents (white-throated woodrat, cactus mouse, Harris’ antelope ground squirrel and round-tailed ground squirrel) and other small mammals (desert cottontail) abound.  In addition to these more common species, rarer and more reclusive animals, such as mountain lion, badger, Golden Eagle, and groundsnake, are found. Birds that typify this habitat for this nomination include Costa’s Hummingbird, Gilded Flicker and Elf Owl.

Overall, the fauna of the Tucson Mountains is similar to the wildlife found in the Sonoran desertscrub of the eastern part of this IBA; conspicuous resident vertebrates include mule deer, coyote, javelina, gray fox, bobcat, Gambel’s Quail, Greater Roadrunner, western diamondback rattlesnake, and Gila monster. However, the Tucson Mountain area is lower in elevation (2,200’-4,687’), flatter, and sandier than the eastern portion of the IBA and thus contains some faunal elements associated with the Lower Colorado River subdivision of the Sonoran desert, such as kit fox, desert iguana, long-nosed leopard lizard, and sidewinder. 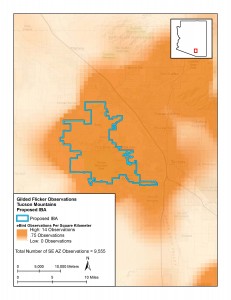 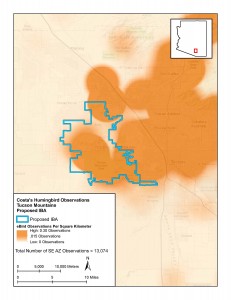 This IBA qualifies for Continental status for Gilded Flicker, Elf Owl and Costa’s Hummingbird. Costa’s Hummingbird is found abundantly in the saguaro uplands habitat. Other bird species of interest include: Gila Woodpecker and Bell’s Vireos in the lower elevations. Desert Purple Martins (eBird high count 30) favor the saguaro upland habitat and use cavities in the cacti made by woodpeckers as nest holes. This IBA is excellent for Lucy’s Warbler and Abert’s Towhees. In several different elevation zones Canyon Towhees can be encountered. This area is also great for sparrows including Rufous-crowned Sparrows and Rufous-winged Sparrow, and in the winter significant numbers of Brewer’s Sparrows in different elevation zones.