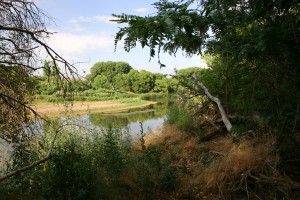 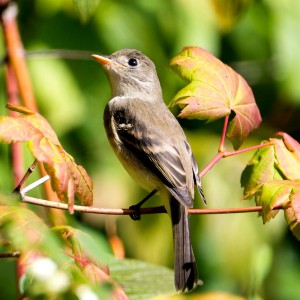 Site Description: The 17-mile stretch of the Verde River running through the boundaries of the Town of Camp Verde supports a variety of important woody riparian and wetland vegetation types that provide important habitat for resident and migratory birds, as well as a host of other wildlife species. The predominant habitat type within this IBA is riparian vegetation, comprised of Sonoran Deciduous Swamp and Riparian Scrub type vegetation, and Sonoran and Oasis Riparian Forest. Significant stretches of the Verde River through Camp Verde are healthy stands of Fremont Cottonwood-Goodding Willow gallery forests – one of the rarest forest type in North America. Within the IBA boundaries, there are significant areas of mesquite bosque woodland habitat of arid uplands sitting adjacent to the riparian habitat zone. These areas are characterized by open, park-like conditions, with an understory of grassy forbs. This vegetation type, while once common, has become increasingly rare due to development – either residential or agriculture – in the upland areas near perennial rivers and streams. It is an area favored by many threatened and endangered bird species, such as yellow-billed cuckoo and Bell’s vireo. 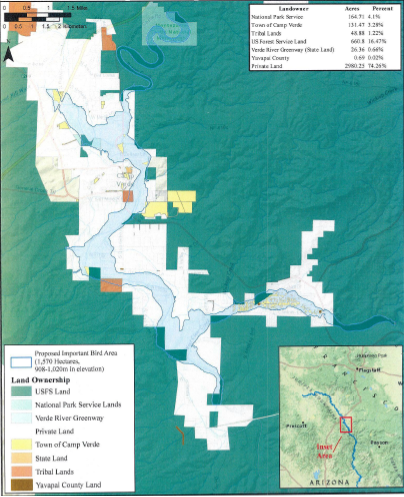 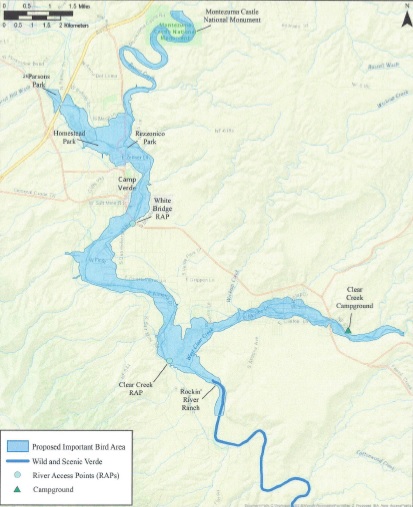 The Verde River and its tributaries, as one of the last healthy perennially flowing river ecosystems in the state of Arizona, has a unique and important role in supporting a wide range of wildlife species, especially endangered and threatened species that rely on intact, high quality riparian habitat in order to thrive. The Verde River watershed supports over 78% of the breeding bird species found in Arizona. The riparian vegetation, composed of cottonwood-willow gallery forests, mixed broadleaf deciduous riparian forest, and uplands areas featuring mesquite bosque habitat, can be found along the Verde River corridor in Camp Verde. This habitat is one of the rarest and – from a wildlife habitat perspective – among the most valuable for an arid desert state. The combination of vegetation types in close proximity to each other – that of the cottonwood-willow forest adjacent to mesquite bosque – is a unique habitat that is preferred by important bird species of concern, such as yellow-billed cuckoo, Southwest willow flycatcher, Bell’s vireo, yellow warbler, and Lucy’s warbler. 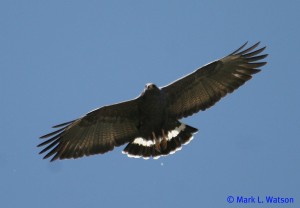 The primary threats to the Verde River corridor and its riparian habitat include impacts affecting surface water flows and groundwater recharge into the Verde River. Flows are impacted by a range of activities, including long term drought conditions resulting from climate change; population growth and development leading to an increase in exempt wells and groundwater pumping; surface water diversions that dewater some stretches of the Verde River; and the establishment and spread of invasive plants nad phreatophytes, such as Tree of Heaven, Russian olive, tamarisk, and arundo (giant reed).
A number of NGO organizations, including Friends of Verde River Greenway and The Nature Conservancy, are working on efforts to restore and maintain an appropriate level of base flows in the Verde River to sustain ecological functions, including riparian vegetation recruitment, establishment and maintenance, and flows to sustain aquatic species and riparian obligates. These projects range from irrigation efficiency efforts, to voluntary groundwater mitigation programs, and a range of other activities. Friends of Verde River Greenway has also been engaged for the past 8 years in invasive plant removal, treatment, and monitoring efforts throughout the watershed, and plan to continue their activities and focus on the stretch of the Verde River running through Camp Verde.