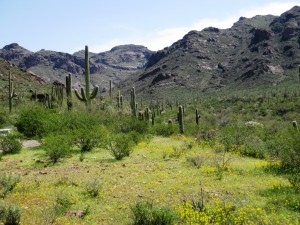 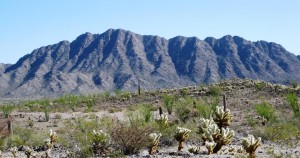 Site Description: This IBA includes the entire Cabeza Prieta NWR and Organ Pipe National Monument. There is a standing request for permission from the DOD to include the Barry Goldwater Air Force Range in the IBA. This is the largest IBA in Arizona and one of the most remote. Cabeza Prieta is the third largest National Wildlife Refuge in the lower 48 states and contains Arizona’s largest Wilderness area.  As some of the most pristine and isolated desert landscape in America, the various plant communities contained within the refuge provide vital habitat to many native bird species, including species of special status.  Creosote flats, bursage dotted bajadas, and sonoran desert uplands with saguaro, mesquite, paloverde, ironwood, ocotillo and cholla personify the vegetative landscape and provide essential habitat for many bird species. 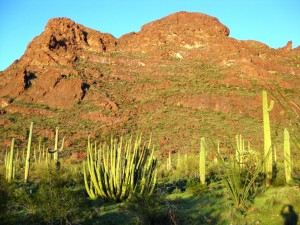 As a protected area, Organ Pipe Cactus National Monument allows the life of the Sonoran Desert to flourish under nearly ideal wilderness conditions. The monument is an outstanding natural preserve where one of the of the Earth’s major ecosystems survives almost unspoiled. Positioned north of the Sea of Cortez, the Organ Pipe Cactus NM is along a primary migratory flyway. American Bird Conservancy identified this site in 2001 as one of 500 most important bird areas in the United States. (http://www.nps.gov/orpi/naturescience/index.htm) Organ Pipe Cactus National Monument exhibits an extraordinary collection of Sonoran Desert plants. Twenty-six species of cactus have mastered the art of living in this place, including the park’s namesake and the giant saguaro. Elephant Tree (Bursera microphylla) provides a winter food resource (seeds) for Gray Vireo. 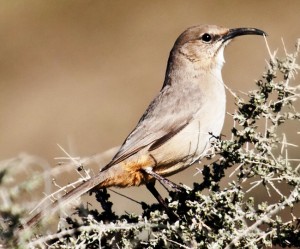 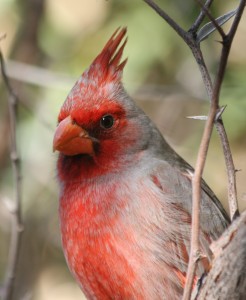 Other notable highlights of the two-year IBA surveys are some birds of overall sparse distribution in Arizona, including:  A group of four Long-eared Owls in Daniel’s Arroyo Valley, Black Vulture (found here at the extreme northwestern part of their continental distribution) and an immature Golden Eagle in Chinaman Flat South Valley.

Organ Pipe NM: Organ Pipe Cactus National Monument is an excellent example of an Arizona Upland ecosystem within the Sonoran desertscrub biome.  In early spring of 2009 and 2010, five canyons were surveyed by Audubon IBA bird survey transects:  Alamo Canyon, Arch Canyon, Estes Canyon, and Victoria Mine Trail (VMT surveyed only in 2009).  Audubon IBA surveys were restricted to the Ajo Range and a small section of the Sonoyta Mountains (by VMT), as there were park restrictions due to safety concerns preventing access to the Puerto Blanco Mountains, Bates Mountains, Cipriano Hills, and Quitobaquito Hills and Springs. These intensive Audubon surveys show this park to be important to at least five special conservation status species in Arizona.  Additionally, our surveys found this park is most important for its outstanding xeric riparian and upland sonoran desert habitats supporting an exceptionally diverse avian community. 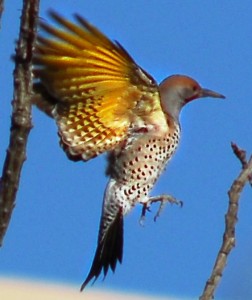 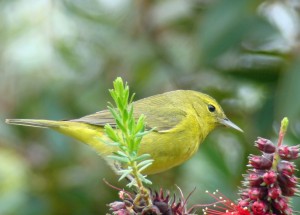 Conservation Issues: As the Refuge shares a 56-mile international border with Sonora, Mexico, it is not surprising that two of the most important threats to the ecology of Cabeza Prieta National Wildlife Refuge are the impacts of illegal border crossers and the actions of Border Patrol officers attempting to apprehend them.  The rules of the refuge prohibit any vehicle traffic off of designated public use roads as the tracks made by vehicles could remain for hundreds of years in this fragile desert ecosystem.  Despite this prohibition, many tracks, some of them deeply rutted, were observed by IBA surveyors miles from any road presumably from both illegal border crosser traffic and Border Patrol vehicles attempting to intercept such traffic.  There is also a significant amount of refuse left all over the Refuge by illegal border crossers and drug smugglers including plastic water jugs, abandoned vehicles and other inorganic waste.

Another concern is that most of the Refuge falls within the air space of the Barry M. Goldwater Air Force Range.  Numerous low-flying aircraft cross the Refuge on their way to air-to-air bombing and gunnery ranges located to the north and some military training exercises occur over the Refuge.  Evidence of such exercises can be found on the Refuge in the form of metal flare casings and other waste from ordnance and ammunition.

Impacts such as the off-road vehicle damage to soil and vegetation are difficult to deal with yet impossible to ignore as their impacts are potentially devastating to the ecology of the area. 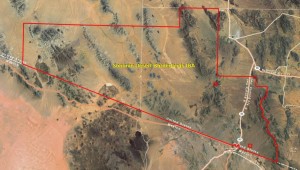