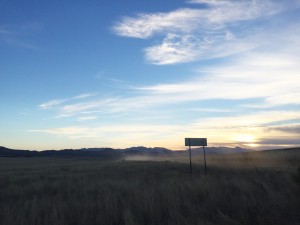 Site Description:   This beautiful valley is the headwaters of the Santa Cruz River, which flows into Mexico then turns north back into the United States and eventually joins the Gila River. This valley is largely private land that has historically been used for cattle grazing for the approximately 175 years. At the center of the valley is the San Rafael State Natural Area, formerly the San Rafael Ranch, which was acquired by the state in 1999 with help from the Nature Conservancy to preserve this beautiful area. Much of the private ranching land in the valley is protected by conservation easements to ensure that the sustainable grazing practices that have preserved this valley continue. The riparian areas and native grass prairie are home to many species of plants and animals. One of the endangered plants, Huachuca Water Umbel grows in the river area. One can also see Mule Deer, Javelinas, Antelope, Bobcats, Cougars, and Coyotes along with the many bird species of the prairie. 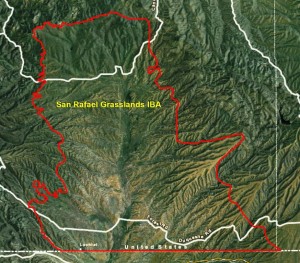 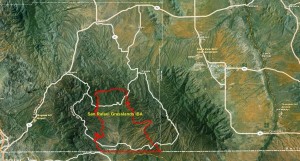 The habitat is primarily short grass prairie and is one of the finest stands of native grassland in the state. This area encompasses one of the last remaining un-fragmented remnants of a grassland ecosystem in the U.S. between southern California and west Texas. Plains Grassland in SE Arizona is situated above 1,200 m and below 2,300 m in elevation. The Plains Grasslands that occur in SE Arizona are composed of mixed or short-grass communities (Brown 1994). The San Rafael Valley also has Madrean evergreen woodland and riparian deciduous broadleaf woodland on the periphery of the valley.

Ornithological Summary: The San Rafael Grasslands is a valley with wide-open high grasslands that are best known for wintering raptors, sparrows, pipits, and longspurs. Short grass prairie species can be found here all through the year. This is a unique area with rolling hills, native grasses, and oak and cottonwood trees. As some of the last remaining unfragmented short grass prairie habitat left in the American Southwest, this area is of vital importance for grassland species of birds. Two IBA coordinated surveys were organized and implemented on 12/10/2010 and 2/12/2011 in which the five driving routes were surveyed simultaneously. The surveyors found many species of conservation concern including Chestnut-collared Longspur (87 on 12/10 & 637 on 2/12, IUCN NT, Audubon Watch List Yellow, USFWS BCC 2008), Cassin’s sparrow (5 on 2/12, USFWS BCR #35), Arizona Grasshopper Sparrow (breeding) (10 on 12/10 & 5 on 2/12, AZGFD SGCN 1b, USFWS BCR), Brewer’s Sparrow (12 on 12/10 & 33 on 2/12 Audubon WL Yellow, USFWS), Savannah Sparrow (186 on 12/10 & 344 on 2/12, AZGFD SGCN 1b), Lincoln’s Sparrow (23 on 12/10 & 14 on 2/12, AZGFD SGCN 1b), and Prairie Falcon (4 on 12/10 & 2 on 2/12, USFWS BCC #33). The number of Chestnut-collared Longspurs documented meets the criteria that qualify this area as a Global IBA. 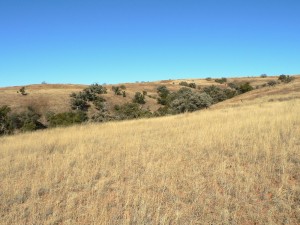 The valley contains the famous Bog Hole Wildlife Area noted for its abundance and diversity of waterfowl such as Canvasbacks, Cinnamon Teal, and Mexican Mallards.  This area also provides habitat for other birds such as Marsh Wren, Lincoln’s Sparrow, Spotted Sandpiper, Solitary Sandpiper, Wilson’s Snipe as well as several swallow species. Other animals that utilize this habitat are Sonoran Tiger Salamander, White-tailed Deer, Bobcat and White-nosed Coati. 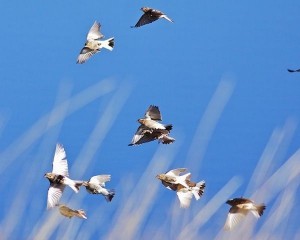 The Rocky Mountain Bird Observatory also conducted bird surveys in the San Rafael Valley in 2011.  They conducted 7 walking transects perpendicular from the road over 2 days (1/29/11 and 2/1/11) in the northern portion of the valley, with each transect conducted once. They found largely the same suite of grassland species as the IBA surveyors; highlights include totals of 323 Chestnut-collared Longspurs, 3 White-tailed Kites and 2 Northern Harriers.

It should also be noted that there was a reported sighting of an Aplomado Falcon in the San Rafael Valley on November 24, 2005. Peter Walsh reported it as perched in the dead top of a cottonwood on the west side of San Rafael Rd, 2 miles north of the Duquense-Lochiel Junction.

This area also meets the IBA Criterion, Rare, Unique, or Exceptional Representative Habitat/Ecological Community, as it is a prime example of Short-grass Prairie and Un-fragmented Grassland. The plants that make up this grassland include purple three-awn, four species of grama grasses, plains lovegrass, sacaton, brittlegrass, and vine mesquite. Such an excellent suite of grassland plants with out the presence of exotic plants or encroachment from shrubs or woody plants makes the San Rafael Valley one of the most complete grasslands in the state and is vital habitat for many bird species. 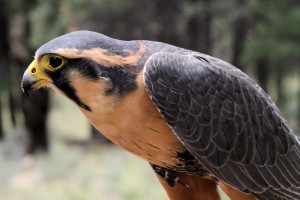 Conservation Issues: The most relevant current threat to this valley is mining. As the headwaters of the Santa Cruz River, this area is particularly vulnerable to the water depletion and fouling associated with mining. Preliminary plans are underway for an open pit copper mine and in 2007 Freeport/Phelps Dodge staked mining claims in the San Rafael Valley. There have also been reports of BHP Billiton asking for permission to sample well water on private land as they are interested in prospecting for porphyry copper deposits in the San Rafael Valley.

The prospect of this and other proposed mines in the nearby Patagonia Mountains and Canelo Hills created a controversy in the area with many residents of Santa Cruz County trying to prevent there mines using petitions, letters to congress, websites and other channels.