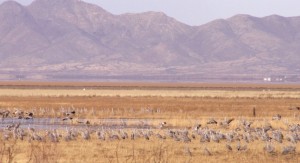 Site Description: The heart of this IBA is the massive Willcox Playa, a broad alkaline lakebed fringed with semi-desert grassland (primarily saltgrass and sacaton) and mesquite.  The playa is seasonally flooded to a shallow depth.  Outlying this playa are the satellite lakes/wetlands of Cochise Lakes (aka Lake Cochise), alkali flats, and Willcox Playa Wildlife Area containing Crane Lake.  The Playa itself is a former bombing range, and owned by the Department of Defense and administered by the U.S. Army Corps of Engineers.  It is not managed in anyway, and is posted no trespassing.  On the upper east side of the playa is the Arizona Game and Fish Department managed Willcox Playa Wildlife Area, consisting of 555 acres.  The purpose of the Wildlife Area is primarily for optimizing waterfowl habitat and providing for hunting opportunities.  There are ten “pot hole” ponds, and one 30-acre impoundment at the Wildlife Area.  Over-wintering Sandhill Cranes and migratory and wintering shorebirds, waterfowl, and waterbirds use the playa, the Wildlife Area (Crane Lake), and Cochise Lakes for roosting, resting, and feeding.  Sandhill Cranes depend heavily on the surrounding agricultural lands of the broader Sulphur Springs Valley for feeding, particularly in fields of waste corn. 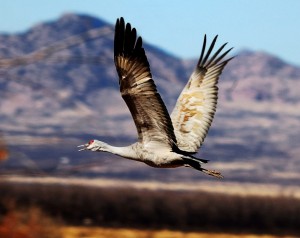 Ornithological Importance: Willcox Playa and Crane Lake, within the northern portion of the Sulphur Springs Valley of Southeast Arizona, supports the second largest over-wintering concentration of Sandhill Cranes (Grus canadensis) in Arizona, typically 4,000 to 9,000 birds (White Water Draw is the area with the largest number of over-wintering cranes, 10,000 to 22,000 and increasing). Crane numbers are typically 5,000 to 8,000 birds using the Playa, and another 4,000 to 5,000 birds using Crane Lake (with much variability at Crane Lake).  There are occasional years when crane numbers spike when a large number of birds (>13,000) from White Water Draw switch to roosting in this area (using either the Playa or Crane Lake).  By the late 1940s the expansion of agriculture within the Sulphur Springs Valley (through the advent of groundwater pumping), provided the waste crop food base (corn) to attract Sandhill Cranes to over-winter in the valley.  The wetter period of the mid 1980s brought large increases in crane numbers, and since then numbers have been steadily increasing at both White Water Draw and the Willcox Playa/Crane Lake within the Valley. This area easily qualifies under the AZ IBA Program criteria for Cranes (2000+ birds). Cochise Lakes and an area of nearby alkaline lakes, also provide important habitat for a great number of bird species in this IBA. 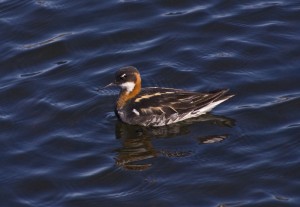 One waterbird species is notably abundant also during migration, this is the White-faced Ibis (April), reaching numbers occasionally in the low 100s (~300).

Cochise Lakes support many species of ducks and grebes.  Ducks over-winter on the lakes in large flocks, primarily composed of American Wigeon (low 100s), Northern Shovelor (low 100s), and Green-winged Teal (15-50+).  In spring, March and April and again in fall, September and October, large numbers of waterfowl pass through and use Cochise Lakes, including:  Ruddy Duck (low 100s), Lesser Scaup (occasionally 100+), Ring-necked Duck (< 50), and Cinnamon Teal (<50).  In rare very wet winters, waterfowl in huge numbers (>15,000, half or which are Green-winged Teal) come to feed and rest within the Playa.  Mallard “Mexican” ducks nest within the Willcox Playa Wildlife Area.  Small numbers of Pied-billed Grebe, and rarely Eared Grebe may also nest.

The alkaline (mud) lakes are important to feeding shorebirds, so are the margins of the Playa and Cochise Lakes.  Peregrine Falcon and Merlin are frequently in the IBA in the winter preying on the duck and shorebird community. 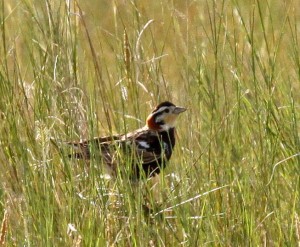 An additional threat is non-native animals (bull frogs) and plants (Giant Reed, Tamarisk, and others), and their resulting impact and competition with native fauna and flora.

Apparently, no active steps for site conservation management are taking place at present (with regards to the above). 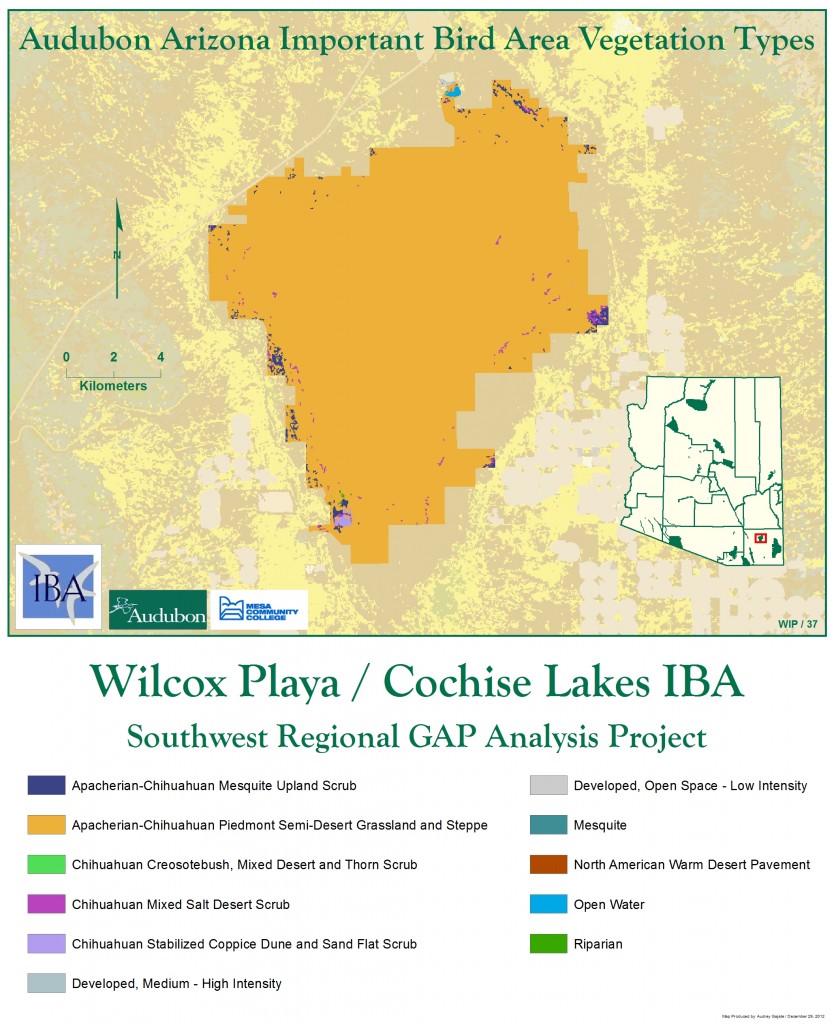 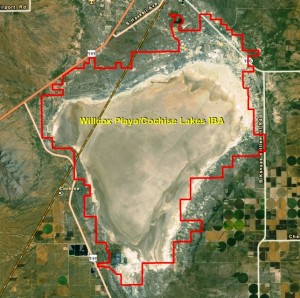